Voter Registration: How Snapchat, Instagram, and Taylor Swift Are Changing the Game

Stating the obvious here: The current political climate can best be described as “tense” (to say the least) and instead of complaining – many people are putting their efforts where they matter most: ensuring that voter registration reaches peak engagement. Constant ‘Breaking News’ alerts remind us of the political tension and on November 6, 2018 (Election Day) the pressure is on. With registration deadlines that vary from state to state, voter registration is a hot topic indeed – A topic that brand marketers, social platforms, and influencers should at the very least, be aware of. Social platforms are promoting voter registration through “for social good” marketing strategies. Here is how Snapchat, Instagram, and Taylor Swift are all driving voter registration.

Today is National Voter Registration day. Text WeAllVote to 97779 and register or double check if you’re already registered. Ask your fam if they registered. Tell your boo to register. Make sure your absentee ballot is going to the right address. WHY? Because if we don’t participate in this democracy, we risk losing it. Because people fought and died for your right to vote. But most of all— because if you’re feeling disempowered this is how you make an impact and make REAL change. Tuesday November 6 is Election Day and all 435 House seats are up for re-election. 35 Senate seats. Plus there will be local candidates and measures on your ballot that will impact your life in a VERY REAL WAY I PROMISE YOU. This is your shot. Be ready. #voterregistration #nationalvoterregistrationday #whenweallvote

Snapchat is working on promoting voter registration in a few ways:

Instagram will be also be joining in on the fun: 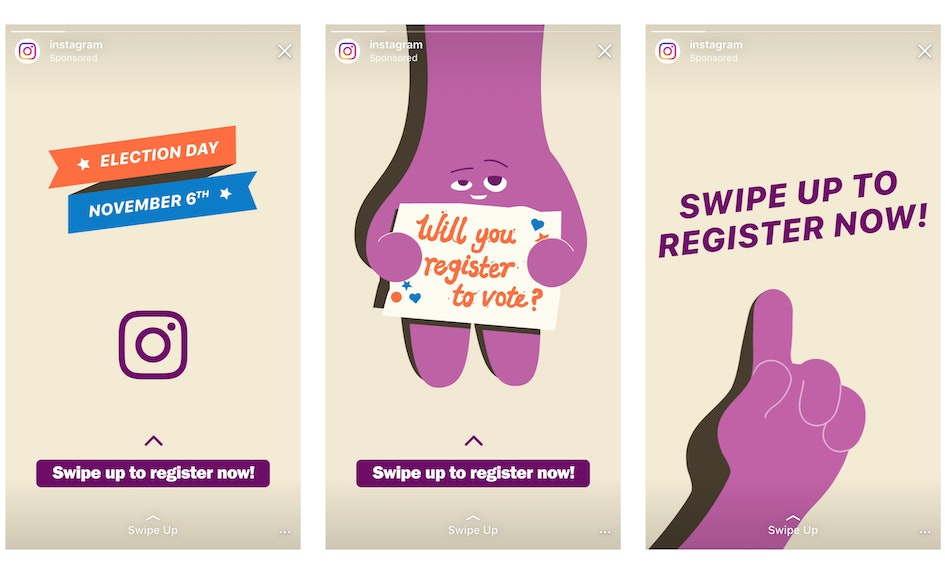 The Power of the Influencer:

Perhaps the most notable way that Instagram has increased awareness around Voter Registration has nothing to do with their marketing tactics, and everything to do with Swifties – the loyal fanbase of Taylor Swift. Swift previously caught flack for not promoting/being definitive about her political affiliations, but this week she shared personal political views via Instagram:

I’m writing this post about the upcoming midterm elections on November 6th, in which I’ll be voting in the state of Tennessee. In the past I’ve been reluctant to publicly voice my political opinions, but due to several events in my life and in the world in the past two years, I feel very differently about that now. I always have and always will cast my vote based on which candidate will protect and fight for the human rights I believe we all deserve in this country. I believe in the fight for LGBTQ rights, and that any form of discrimination based on sexual orientation or gender is WRONG. I believe that the systemic racism we still see in this country towards people of color is terrifying, sickening and prevalent. I cannot vote for someone who will not be willing to fight for dignity for ALL Americans, no matter their skin color, gender or who they love. Running for Senate in the state of Tennessee is a woman named Marsha Blackburn. As much as I have in the past and would like to continue voting for women in office, I cannot support Marsha Blackburn. Her voting record in Congress appalls and terrifies me. She voted against equal pay for women. She voted against the Reauthorization of the Violence Against Women Act, which attempts to protect women from domestic violence, stalking, and date rape. She believes businesses have a right to refuse service to gay couples. She also believes they should not have the right to marry. These are not MY Tennessee values. I will be voting for Phil Bredesen for Senate and Jim Cooper for House of Representatives. Please, please educate yourself on the candidates running in your state and vote based on who most closely represents your values. For a lot of us, we may never find a candidate or party with whom we agree 100% on every issue, but we have to vote anyway. So many intelligent, thoughtful, self-possessed people have turned 18 in the past two years and now have the right and privilege to make their vote count. But first you need to register, which is quick and easy to do. October 9th is the LAST DAY to register to vote in the state of TN. Go to vote.org and you can find all the info. Happy Voting! 🗳😃🌈

Taylor not only shares who she intends to vote for, but also the state in which she is registered to vote in – Tennessee. And just like that the Influencer Marketing Halo effect strikes again. Kamari Guthrie of Vote.org shared that after Taylor posted on Instagram, voter registration rose to 65,000 within 24 hours of her Swift’s Instagram post. Swifties in Tennessee also drove up the states’ registration numbers, nearly doubling the amount of voters who registered in September within a single day. Vote.org site visits and impressions also rose to 155,940 after Taylor’s post.

Captiv8 data verifies that 72% of Taylor’s audience is between the ages of 18-34 year olds, meaning Influencer marketing endorsements like hers will be integral to securing Millennial voter registration. Reach out to Captiv8 to find the perfect Influencer to help take your message to the next level.