Beverage-maker Pepsi announced this week it was withdrawing its newest commercial campaign featuring reality-TV star and fashion model Kendall Jenner amid a growing social media backlash. To give you an idea on how this campaign fared during its short viral lifetime, here is some Captiv8 data that further provides audience sentiment: 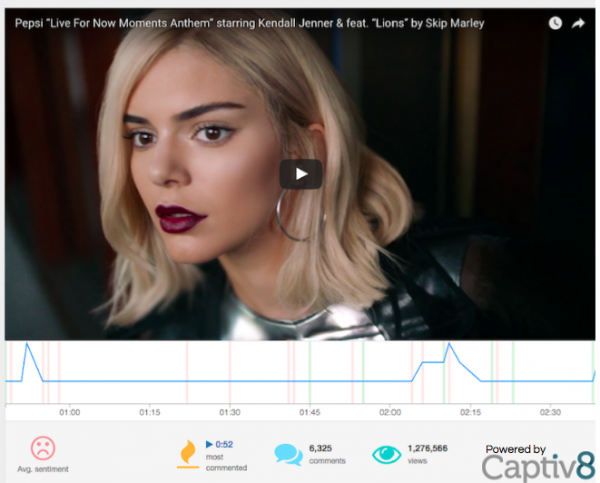 As indicated in the analytics from Captiv8, the campaign skewed negative/neutral with an overwhelming negative average sentiment. By the time of the data pull, the video had an average of 20,836 dislikes – 84% of the total engagement. A variety of comments on Twitter, both from famous personalities (for example, MLK’s daughter Bernice King) and normal users also help explain some of the reasons behind the controversy:

If only Daddy would have known about the power of #Pepsi. pic.twitter.com/FA6JPrY72V

What exactly went wrong? Though plenty of brands have tried to make a political statement in the past, Pepsi seems to have “hit a nerve” given today’s tense political climate. Here are a few factors to consider to help explain what went wrong.

As Pepsi’s latest campaign illustrates, social marketing can be a delicate balancing act between being “in the moment” and exploiting genuine human moments for commercial gain. How do you strike the right balance for your brand to make sure you’re doing the right thing for your customers and community on social? Talk to the experts at Captiv8 today.